The townland of Greenaun is located to the southwest of the village of Tourmakeady on the shores of Lough Mask in Co. Mayo. The Partry Mountain range lies to the west of the lake, and from there a number of mountain streams tumble and flow down the hillsides and enter Lough Mask below. On the opposite side of the lake to Greenaun, the towns of Ballinrobe and The Neale are located on the relatively-productive flat-lands. In between these two areas Lough Mask glistens like a shimmering silver mirage on a bright day, and lights up the surrounding landscape with the most brilliant light. The Place-name ‘Greeneaun’ translates as solarium; a fort commanding a prospect’. From the elevated position on the west of Lough Mask and looking east with the mountains behind you, the landscape seems open, with panoramic views across the glistening water body and the wild lands of this part of Co. Mayo.

Historically, a large portion of the southern part of the parish of Tourmakeady was formerly part of Co. Galway. However, in 1898 the entire parish was transferred to Co Mayo. Like much of this area around North-Galway/South-Mayo, the wider region was predominately Irish speaking until recent decades. Today, the Gaelic speaking areas in Co. Mayo have been reduced to just three clusters; Erris, Achill Island and Tourmakeady. There are 1,000 people living in the parish of Tourmakeady of which approximately 400 are daily Irish speakers.

The mountainous landscape was dotted with small farmsteads through the 19th and earlier parts of the 20th century. But the area was devastated during the Great Famine of the mid-19th century and never fully recovered from this tragic event. Like the Irish language, the population dwindled in the years and decades that followed. At the turn of the 20th century, many one-roomed schools were still in use in the area, but as the century progressed, many were closed or consolidated as people left the area and emigrated abroad. Some of these school buildings still remain on the landscape in varying ruinous states, though the population that required them is now gone. Below are some other examples from the immediate area around Tourmakeady:

The one-roomed school house in the townland of Greenaun is marked as Glensaul School on the First Edition 25-inch Ordnance Survey sheet for the area (1898-1908), and is named after the adjacent`Glensaul River. The plaque above the doorway reads Scoil Náisunta Gleann Sál though no date is inscribed for the building. The school house is near-identical to nearby Finny National School which was renovated in 1946, and the current building at Greenaun is probably of a similar date, though an earlier school house was located here at the time of the First Edition 25-inch Ordnance Survey (below).

Outside, the school enclosed by a low wall. To the west, a utilitarian concrete shelter was constructed for the school children. To the rear of the school house were the simple outdoor toilets.

The landscape of this part of Mayo seems idyllic to me; the splendid isolation and rugged terrain are appealing. But the reality of this setting was undoubtedly different in the early part of the 20th century. As I’ve mentioned above, the area was devastated during the Great Famine, and poverty was a reality here for many years. This poverty drove the long-standing tradition of emigration from the area, and as the population declined the numbers of native Irish speakers dwindled. At the time of the Folklore Commission’s Schools Collection in the mid-to-late 1930s, the area was a strong Gaeltacht. The Folklore Commission records collected at Glensaul National School were entirely in the Irish language. Below is an extract from this collection, a local tale titled An Tobar Beannaithe (The holy well). The story describes a local Holy Well associated with Naomh (Saint) Caoláin that was once located in a field named Bpáirc i dTeampaill, (Field of the church) and the destruction of the adjacent church, allegedly by Cromwellian Forces. According to the story, one day a local woman attempted to wash her balcaisí (Sunday clothes) in the sacred water at Bpáirc i dTeampaill, which caused the well to dry-up and re-appear at Druim a Drioghain where it is now located. 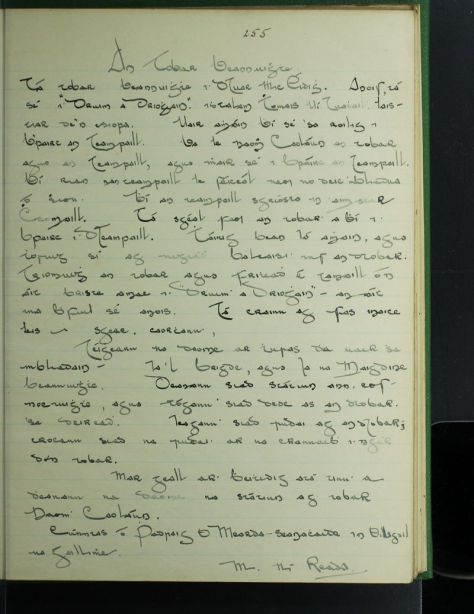 If you or someone you know attended this national school, please do get in touch and share any stories, anecdotes, photographs, or any other memories you may have. You can do so here. If you would like to purchase the book The Deserted School Houses of Ireland, visit the shop page here.