Spike Island is a rounded, low-lying island centrally located within Cork Harbour. It covers an area of about 103 acres, and it’s highest point is just about 100 ft above sea level. The landing stage on the island’s northern shore is almost exactly 1 mile from the jetty at Cobh, though shallow waters and sandbanks to the east of neighbouring Haulbowline Island mean that a direct crossing route from Cobh to Spike is only safe on a high tide. Cork Harbour has been a working port and a strategic defensive hub for centuries; the mouth of the harbour was overlooked by Fort Meagher (Camden) and Fort Davis (Carlisle) from the 18th century onward, although these fortifications were in fact later incarnations of earlier 16th and 17th -century defensive structures.

The islands central position within the well-sheltered harbour ensured it was to be considered of strategic importance. Several changes of ownership of the island occurred between 1490 and the 1770s. The first artillery fortification on the island was built in 1779. Its construction was prompted by the outbreak of the American Revolution in 1775 and in particular by the entry of France (1778) and Spain (1779) into the war on the American side. Cork Harbour was used as an assembly point for convoys to the Americas and at one point more than 400 vessels were assembled in the harbour. Initial phases of a permanent fortification of the island began in 1789/90, and building and landscaping works associated with the military fortification continued through the early 19th century. In 1847 the military complex was converted to a prison and convict depot, and the island was used to house “convicts” prior to penal transportation. By 1850 over 2,000 convicts were detained on Spike Island. Layers of complex and tender history are intertwined with the landscape of Spike Island at this time, and the island has been the subject of recent work by Cal McCarthy and Barra Ó Donnabháin.

Following the establishment of the Irish Free State, three deep water Treaty Ports (of which Spike Island was one) were retained by the United Kingdom in accordance with the Anglo-Irish Treaty of  1921. As such the handover of Spike Island to the Irish Free State did not occur until 1938. The island remained the site of a prison and military base (for the Irish Army, the FCÁ and later the Navy) through the 20th century, until the prison facility closed in 2004.

Spike Island is most frequently remembered for its military and prison associations, but it is worth noting that through the 19th and 20th century, it was also home to a small civilian population. The civilian population dwindled through the 1970s and 80s and has since left the island, with many previous residents moving to nearby Cobh. The current census data shows that there are no permanent residents on Spike, though the former military and prison installation is now a popular tourist attraction with daily tours all year round.

The once-vibrant local community on Spike Island is greatly overshadowed by the island’s other history, but hidden away on the northern side of the star-shaped fort is a humble corrugated-iron-clad building that was once the island’s school house. Most likely built in the 1940s, (after the handover of the treaty ports in 1938), this building replaced an earlier school house located nearer the landing stage and marked on the First Edition 25-inch Ordnance Survey Sheet.

The school house, constructed from corrugated-iron, was not of the typical designs supplied by the Office of Public Works at this time, with corrugated-iron rarely if ever being used as a building material for schools. Given it’s atypical design it is quite likely that the OPW were not involved in the construction of the school. This may be due to the fact from 1938 to 1979, the Irish Army, especially the Artillery Corps, Coast Defence Artillery (C.D.A.), were garrisoned Spike Island, primarily to man the six-inch guns. The construction of the school house that would serve the civilian population as well as the children of officers stationed on the island, may well have fallen to the military without the involvement of the OPW.

The building was a three-roomed school house, with classrooms divided by sliding screens. Off a long, central corridor were cloakrooms and bathrooms. The building itself was located at the edge of an old quarry and sheltered to the south by the imposing military fortifications.

In 2018, Aedin Johnston of the Evening Echo interviewed Noel Mullen who had the following to say about his time growing up on Spike Island and attending the school;

“There was also a national school on the island. The teacher, Mr Hurley, used to arrive by boat from Cobh to teach the children… …We watched out for the arrival of the boat and prayed for bad weather so that we’d get a day off,”

Noel admits. He also remembers how the teacher used to give them loads of work to do and then leave them to their endeavours while he went off to play a game of golf and have lunch with one of the officers.

“The pupils used to go out to play and time it so that they would be back before the master returned to the school.

Students took a little bit of time off school when a shipment of coal arrived by boat to the island. A lorry was brought with it in order to carry the coal to the barracks. As there was a sharp incline up from the pier, the journey was extremely slow.

The older boys used to climb up on the lorry and throw pieces of coal off the back, where the younger boys were waiting with bags to pick it up. When finished they would then go to school and pretend they had been sick. The teacher, having inspected their hands and clothes, would give them a slap, knowing full well what they had been up to.

When the children went home, if they let it slip that they had received a slap from the teacher, they would get another one from their mother!”

Noel recalled that if any of his seven siblings were being reprimanded at the table on the same night that he got the slap from the teacher, then it was he who received their punishment in order to make sure he behaved in school.

“The thing about growing up on an Army base is that you were let away with nothing,” he added. “Not only did your mother and father keep an eye on you but so did the rest of the adults on the island.” 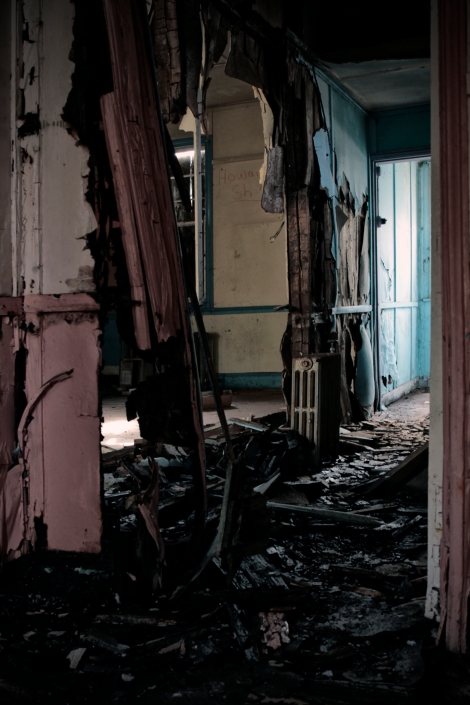 Michael O’Connor, one of the junior pupils at the school in 1948, recalls the following about his first days of school on Spike Island;

I was terrified to start school.
But when Miss Kathleen Coleman took my
hand on the first day of my education,
I knew everything would be alright…’

If you or someone you know attended this national school, or if you have any further information about this school – please do get in touch and share any stories, anecdotes, photographs, or any other memories you may have. If you know of further schools that I could visit, please do let me know. If you would like to purchase the book The Deserted School Houses of Ireland, visit the shop page here.