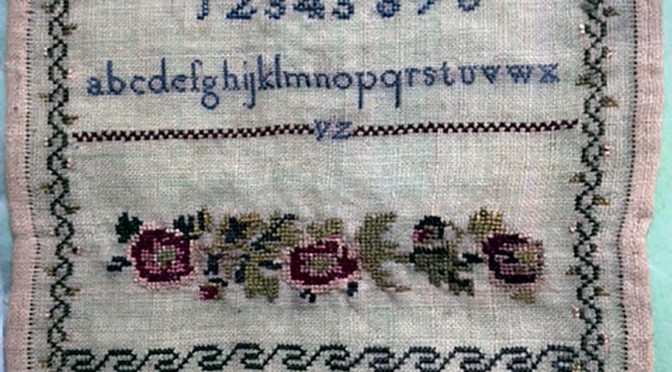 The Needlework of the Pupils of the National Model Female Schools

The images below are photographs of a beautiful National Model School needlework workbook that were kindly passed on to me in recent weeks by Loletta Hale. This first edition of this workbook was published in Dublin by the Hibernia Press Office in 1835 (reprinted in 1853 and 1861). The copy featured here was purchased at Whitney Antiques in the UK last year. It is one of possibly only a handful of surviving copies. You can see the dates 1846 and 1854 embroidered on two pieces of needlework, and this workbook was probably in use around these years.

In 1834, three years after the establishment of the national system of primary education in Ireland, the first Model School was opened in Upper Merrion Street, Dublin. Model Schools were teacher-training institutions under the auspices of the Commissioners of the Board of National Education, the administrative body of the national system. Each Model School maintained at least one national school where student teachers could practice their skills and gain experience in teaching.

These training institutions were numerically insignificant, never exceeding thirty as opposed to the thousands of ordinary national schools. It was originally intended that only male students would be trained for the office of teacher at the Model Schools. Female student teachers were not accepted until 1842.

The book contains simple directions in needlework and cutting out intended for the use of the National Female Schools of Ireland. Needlework and the specimens of work were added to the book, mounted on green stock paper as issued. Published to assist teachers in, and patrons of the National Female Schools of Ireland, “for the improvement of the poor”, the work includes “simple directions for plain and fancy works” giving directions for the various techniques of needlework.

This copy of the workbook retains actual mounted specimens including; a sampler, a fully realised miniature shirt (or smock) for a boy, and “gathering and fastening-in gathers” for sleeves, button-holes, and seaming. The Model Schools promoted the education of the poor in Ireland. They often taught knitting, as did orphanages and workhouses, with the aim of providing the poor with a skill for gainful employment.