In 1837 the travelling antiquarian Samuel Lewis described the topography of Co. Westmeath as ‘diversified by hill and dale, highly picturesque in many parts, and deficient in none of the essentials of rural beauty, but timber’. Travelling north from the boglands of Co. Offaly into Co. Westmeath, there is certainly a notable change in the landscape – the brown watery flat-lands give way to green hillsides and winding roads which navigate the undulating farmland. Docile cattle peer over low stone walls, and traffic is largely agricultural. 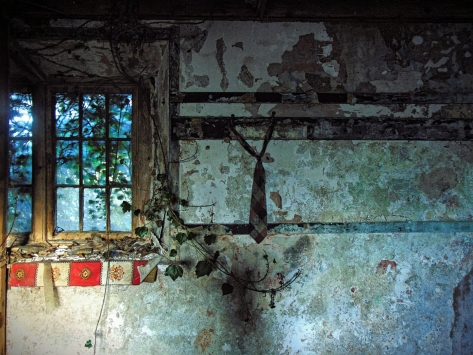 South of Lough Sheelin (the fairy lake) and hidden among the low hills is the rural hamlet of Tullystown. Within the townland of Tullystown is Tullystown Cross; easily missed on the narrow local roads. During the 1830s, the First Edition Ordnance Survey sheet for the area showed that for at least for the early part of the 19th century, this crossroads was the focal point of the townland, with a scattering of houses, a Roman Catholic Church and an adjacent school house. Nowadays there is no trace of the church marked on the OS Map, and only the school house remains.

Today the school house looks similar to any other vernacular house from the 19th century in Ireland. On first viewing, it is difficult to identify that this is in fact a run-down school building, with no date plaque or notable features other than it’s unusual swinging bright blue gate which gives away it’s former use. 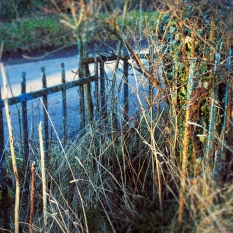 In recent decades the building had been lived in and served as an interesting dwelling house, unassumingly overlooking the crossroads. Inside and scattered throughout, is the debris of vernacular life in the school house when it was used as a residence. Religious paraphernalia, rotting cupboards and the remnants of brightly coloured stitch-work are slowly disintegrating within the lime-washed walls. 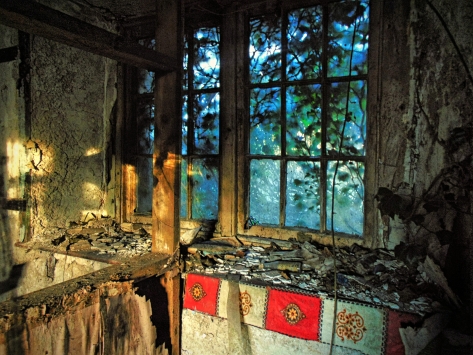 Despite it’s vernacular façade, in it’s former role, Tullystown National School was the focal point local education. It is a detached three-bay single-storey former national school, built c.1840, with projecting single-bay gable-fronted porch to front façade. It’s pitched natural slate roof has more recently been replaced by galvanise though it retains it’s cast-iron rainwater goods and rendered chimney-stack to either end (text adapted from the NIAH). Inside, the former classroom has been subdivided with wooden partitions to form three rooms.

Like Cloghboola School in Co. Cork, this is a relatively early national school. The Education Act of 1831 established the Board of National Education, and approval was given for a national system of education in every part of Ireland, partially paid for by the state. The role of the National Board was originally regarded as supplementary, providing inspection, approval, training, additions to salaries, and cheap books and requisites. It was hoped that in a given district the local gentlemen, businessmen, and clergy would not only provide the buildings, but would also partially pay the teachers, raise money for school perquisites, but also devise courses suitable for local needs.

Present on the First Edition OS sheet, and built shortly after the Education Act of 1831, this school house does not follow the to-form plans of many school buildings from later in the century; being most likely ‘designed’ locally. 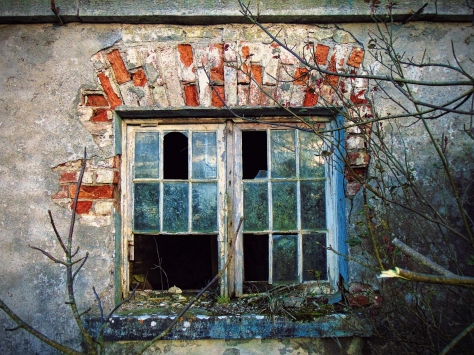 Tullystown Cross National School is a small-scale mid 19th-century national school, it retains its early form and character despite being out of use for a considerable period of time. It also maintains most of its early fabric including early timber casement windows. This unassuming school house is an interesting survival considering the neighbouring Catholic Church was demolished during the 20th century, and it adds an historic veneer to the local area as the earliest purpose-built educational facility still extant. However, it’s been some time since any school children attended school here. Did you, or someone you know attend this school? If so, I’d love to hear more about it. Feel free to comment, question and share!

This is the first blog post in quite some time. It features Scoil Naofa Bride is located in the townland of Cloonfree, a few miles east of the village of Tulsk in Co. Roscommon. Don't forget the Zoom talk hosted by Trasna na Tire this Tuesday April 28 at 8 pm (see event page for details) #history #localhistory #archaeology #architecture #urbex #rurex #ruralireland #geography #roscommon
Don't forget! All are welcome to the @nationalheritageweek public talk in Leabharlann Baile Bhuirne/Ballyvourney Library, De Sathairn/Saturday August 24th at 11 am @corkcocomhairle
For Heritage Week 2019 in Co. Cork- Léacht phoiblí a bheidh ar siúl Dé Sathairn 24 Lúnasa ag 11am / Public talk on The Disused School Houses of Ireland - Saturday, August 24th at 11am.
A new contemporary Irish Life and Culture Magazine has just been launched to which I've made some small photographic contributions. 'Holy Show' is a magazine of contemporary life and culture as seen through the eyes of Ireland’s artists. You an see what it's all about here: https://holyshow.ie/