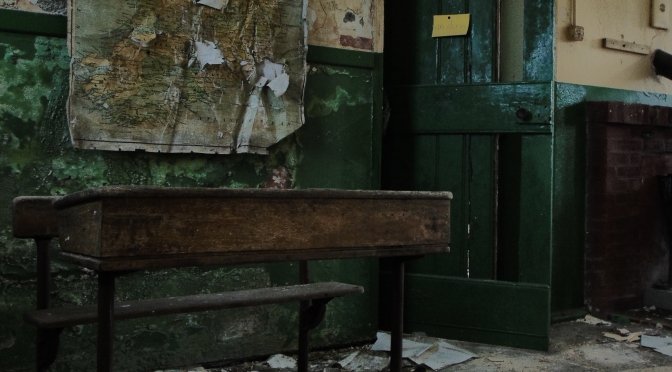 On 12 September 1893 the Great Southern and Western Railway opened a branch line off the existing Tralee–Mallow line, connecting the village of Farranfore with Valentia Harbour on the southern shore of Dingle Bay. At that time it was the most westerly railway line in Europe and passed through some of Ireland’s most spectacular scenery as it climbed through Kerry’s mountainous countryside. It served as the main transport system for the Iveragh Peninsula for 75 years, with the last train departing Killorglin on 30 January 1960.

So, for 67-odd years, a steam-powered locomotive chugged daily along the Farranfore–Valentia Harbour line, passing just north of the glacial lake Lough Carragh, and stopping at Glenbeigh Station. This station was at the foot of Seefin Mountain, and the surrounding landscape at the turn of the twentieth century was beautiful, wild and remote. There were few distractions intruding from the outside world, and the coming and going of the steam train punctuated the day. In the surrounding hills and mountains, schools did not have clocks, and the whistle of train in the quiet landscape as it passed over Curraheen level crossing at 10.15 a.m. let the local schoolchildren know that it was am sos (‘break time’).

There were six schools in the parish of Glenbeigh: Glenbeigh, Curraheen and Leitir, Bunglash, Bohesill and Shanacashel. One of these schools, Bunglash National School, is at the western end of Lough Carragh and still stands, though it is now disused.

It is a detached, two-room national school built in 1873. The form of the building is somewhat unique, or at least does not appear to be one of the easily recognisable ‘to-plan’ designs distributed by the OPW during the latter part of the twentieth century. It is a T-plan building with a hipped roof to the west, and a projecting gabled roof to the east with a date plaque located high on the gable end. Today, the roughcast render has been painted a sober, off -white colour, with portions of the underlying brickwork around the openings being visible where the deteriorating render has fallen away.

Handsome and sturdy six-over-nine sliding sash windows allowed plenty of light and the mountainous views into the classrooms, though much of the glazing has been broken.

The building is in good condition, considering it is over 140 years old. Inside, there is still some of the old school furniture, including school desks and shelving, most remarkably, many of the old textbooks that were used. Judging from the many books scattered about the fl oor, it seems likely that children were still being taught here in the 1990s at least 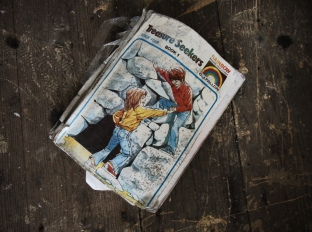 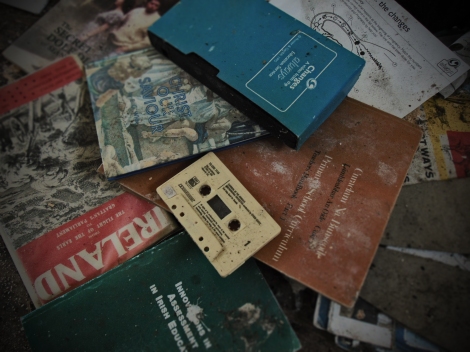 The walls of the classrooms include poster rails. Quite often these do not survive as the building begins to rot, but at Bunglash they are intact, and in the corner of the classroom, a map of Ireland still hangs. The maps shows nearby Lough Carragh and the old, now-disused railway line.

Luile Beith, whose grandmother Kate and her many siblings went to school here from the schools earliest days in the 1870s through to the late 1890s tells how their family lived opposite the school and across the Caragh River in Gortnagan Beg, and how they usually rowed across each school day.

If you or someone you know attended this national school, or if you have any further information about this school – please do get in touch and share any stories, anecdotes, photographs, or any other memories you may have. If you know of  further schools that I could visit, please do let me know. If you would like to purchase the book The Deserted School Houses of Ireland, visit the shop page here.