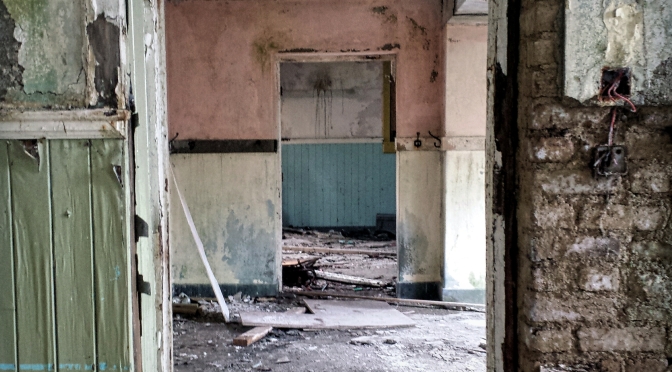 This week (August 20th – 28th) marks National Heritage Week in Ireland. It is a multifaceted event coordinated by The Heritage Council that aims to aid awareness and education about our heritage, and thereby encouraging its conservation and preservation. As part of Heritage Week 2016 there are daily posts to the Disused School Houses Blog and this is the fifth post in the series.

For the past two years I’ve been casually photographing abandoned school houses around Ireland. I don’t have any explanation for why I began doing this, but this hobby started by accident with no real projected outcome. I uploaded a few of my snaps to this blog and from there the project began to develop with a view to publication in the coming months. Matching my images with stories recorded in these abandoned schools by the Irish Folklore Commission in the 1930s, the now-empty buildings came to life once more.

To-date, I have photographed about 90 schools in 20 counties in Ireland. Through the process of photographing these buildings and later researching the schools and their former hinterland,  I have been considering their greater significance as relics of disappearing rural Irish lifeways. A number of patterns have emerged in their numbers and distribution, and so below I’ve written a few paragraphs offering my opinion on the proliferation of empty school buildings across Ireland. (I have also added some of the better images from the past few months, just to keep your interest).

There is no doubt that there is a greater proliferation of abandoned schools in more rural and depopulated areas, with a near absence of them in urban centres. To begin explaining this let’s start with the establishment of the National Schools Act in 1831;

In 1831, Earl Stanley, Chief Secretary for Ireland, outlined the new State supported system of primary education (this letter remains today the legal basis of the system). The two legal pillars of the National School system were to be (i) children of all religious denominations to be taught together in the same school, with (ii) separate religious instruction. There was to be no hint of proselytism in this new school system. The new system, initially well supported by the religious denominations, quickly lost support of the Churches. However, the population showed great enthusiasm and flocked to attend these new National Schools.

In the second half of the 19th century, first the Catholic Church, and later the Protestant churches conceded to the state, and accepted the “all religious denominations together” legal position. Where possible, parents sent their children of a National School under the local management of their particular Church. The result was that by the end of the 19th century, the system had become increasingly denominational, with individuals choosing to attend schools primarily catering to children of their own religion. However, the legal position de jure, that all national schools are multi-denominational, remains to this day though in actuality, the system unfortunately functions much like a state – sponsored, church – controlled arrangement (this is an argument for another day).

Putting these facts in context, let’s look at what was happening in Irish society through this time. Shortly after the establishment of the National Schools Act, Ireland’s population began to decline dramatically, initially triggered by the Great Famine of the 1840s. Between 1840 and 1960, the population of the 26 counties of what would become the Republic of Ireland fell from 6.5 million to 2.8 million. However, this decline was driven by mass emigration, and birth rates in Ireland during this time were amongst the highest in Europe. Because of this fact, despite a dramatically falling population, the need to educate significant numbers of children of school-going age remained. New school buildings continued to be required and used. There were particular spikes in new-builds after the National Schools Act in 1831, and again 1926 with the School Attendance Act which meant parents were legally obliged to send their children to school for the years between their 6th and 14th birthdays.

How is it that with a rising population, there could be less national schools in Ireland? To explain this, we can look at the change in the Irish demographic from about 1950 onward. Through the 1950s, some 400,000 Irish emigrated because of a lack of opportunities for employment at home. With things at their most bleak, at the beginning of the 1960s the programme for economic expansion was initiated, establishing the Industrial Development Association (IDA) which sparked an improvement in the Irish situation, the development of an industrial economy, and a shift in settlement patterns from a rural based economy to one centred around industry and urban settlement. This saw the beginning of an emptying of the rural Irish population into the larger towns and cities.  Small farms began to be consolidated. Further to this, actions such as the ‘evacuation’ of many offshore Islands compounded the issue even more.

All the while Ireland’s birth rate began to drop, becoming more like that of the rest of Europe. 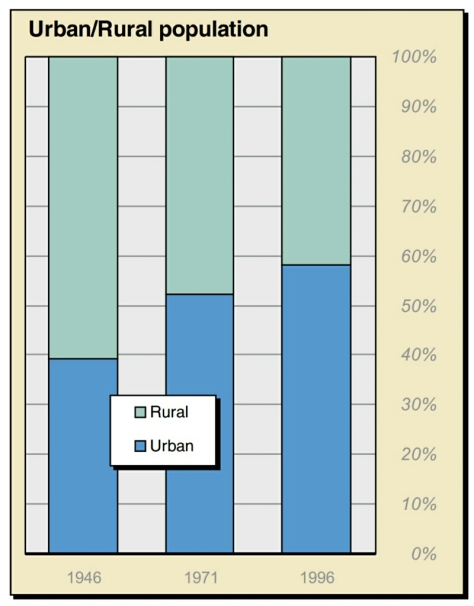 Joining the EEC in 1973, Ireland was now beginning to resemble it’s European neighbours in terms of demographics.  Further to this, motorised transport became more widely available and so the hinterland of small schools became wider,  with many schools in rural areas being consolidated into larger multi-classroom school buildings while the smaller school houses were closed and left to rot.

There are some areas where these factors were more pronounced. Areas of poor quality land which could not support a large population were heavily depopulated in favour of urban living. Areas such as West-Cork, Kerry, Connemara, Mayo, Leitrim, Roscommon, Donegal and the Midlands saw the greatest decline in the numbers of young people remaining at home. And with this being the case, the local birth rates dropped further.

The factors outlined above help to partially explain how, through the 1960s, 1970s, and 1980s, many small rural schools were shut down and why in rural Ireland there are so many abandoned school buildings. In short, it’s a story of changing demographics, emigration, depopulation of the rural countryside, and the changing requirements of rural settlement. During the period 1966-73, the number of one and two teacher schools was reduced by c.1,100. Did this decision to close so many rural schools have a positive or negative impact on the rural Irish landscape in isolated areas? I’d love to hear your opinion.

27 thoughts on “Why are there so many abandoned School Houses scattered across the rural Irish landscape? (Heritage Week 2016 Series)”